Note:  This post was originally published in The Delmarva Farmer and is reprinted with permission.

The day I drove to Easton, Md. to discuss climate change with the staff of The Delmarva Farmer, it was raining so hard I couldn’t see the car ahead of me on the Bay Bridge.
It’s easy to write off a torrential rain like that as just another case of bad weather.
However, long-term records of rainfall in the Third National Climate Assessment in 2014 show that much more of our rain now falls in downpours rather than in the gentle soaking rains I remember as a kid.

The increasing frequency of downpours in our region is just part of what scientists call “the new normal” under climate change. In Maryland, data released earlier this year by the National Oceanic and Atmospheric Administration show that the frequency of rains greater than 4 inches has increased since 1950, as have the number of days warmer than 100 degrees F and the number of nights over 70 degrees F. 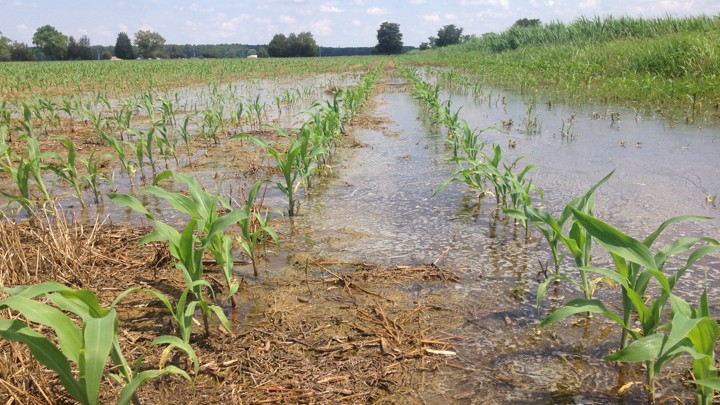 Seasonal patterns of precipitation have also changed, with more rain typically falling in spring and fall and less rainfall in the summer. Winters are warmer and shorter and spring comes earlier.

These new weather patterns are products of four big climatic changes that began in the mid-1800s: The air is warmer, the ocean is warmer, there is more water vapor in the air, and sea levels are rising.

Although the impacts of the “new normal” on agriculture can be large, the USDA and others have identified strategies that will reduce risk in this changing environment. Those solutions and ways to maintain the profitability of Maryland farms as the climate changes will be the focus of this periodic column. Unfortunately, the long-term trends in weather patterns that show climate change are nearly impossible for us to detect during daily living.

As individuals, we experience enormous weather variability. Temperatures vary tremendously across seasons and even between days, obscuring the gradual changes that have caused “the new normal.” Because we don’t personally experience the long-term weather trends that make up climate change, it is easy to ignore or discount them. Also, increases in risk caused by climate change can be tricky to interpret.

Consider an example: we know that smoking causes cancer, and we can say how much a smoker’s cancer risk is increased. However, we can’t point to the specific people who will get sick or identify when it will happen. Some smokers will remain cancer-free. We just can’t say which ones.

The same interpretation applies to risks from climate change. We will still have many years with terrific crop yields. The key is to recognize that yield-reducing floods, droughts, and high temperatures are now likely to come around more and more often.
We can quantify the increased risk, but we can’t pinpoint which years will be bad, what the specific problems will be or when a particular farm will be affected.

Climate change is often regarded as a problem of the distant future. But we can already see climate-related changes close to home in Delmarva. The Mid-Atlantic is one of the nation’s hotspots for sea level rise. In the 1950s, tidal flooding in Annapolis happened about five times each year, now it occurs 50 times per year as high tides move upward.
A 2015 report from the Union of Concerned Scientists predicts that if sea level rise continues at the same pace, the streets near City Dock will flood 180 times each year by 2030.

Coastal communities all across the Chesapeake region are in the same situation. Flooding during high tides is becoming commonplace. Saltwater intrusion into groundwater due to sea level rise is already causing the soil in some fields on the Eastern Shore to become salty, damaging sensitive crops like soybeans. 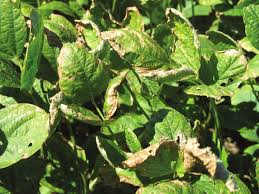 Soybeans damaged by salination of the soil in the field. Credit: Gordon Johnson, University of Delaware

Longer, warmer summers can make for increased population sizes of insect pests, while wetter springs and falls intensify disease and can make it hard to plant and harvest.
Warmer winters mean that fruit crops may not accumulate enough chill hours for a good bloom. This year, the record-breaking warmth in February caused many fruits and ornamentals to bloom early, subjecting them to risk of freeze damage during March.

Recognizing the impacts that climate change is already having on agriculture, the USDA established eight regional Climate Hubs in 2014. These Hubs are tasked with providing farmers with up-to-date advice on how to minimize the risks. Last year, the Northeast Climate Hub, which serves Maryland, released an analysis of how different agricultural commodities are affected by climate change and what farmers can do to minimize their risks (Northeast Regional Climate Hub Assessment of Climate Change Vulnerability and Adaptation and Mitigation Strategies).

← Climate Change: Already In A Neighborhood Near You

You'll receive my newsletter, learn about upcoming webinars and get a message when new blog posts come out.